By Stephanie Baskerville on September 07, 2017

Every organization, regardless of size or industry vertical, is either under attack or already breached. 146 is the average number of days that an attacker has compromised a network before they’re detected.  65% of all network intrusions are due to stolen/compromised credentials.

The face of malicious activities is changing; from attempting to compromise systems via vulnerabilities to compromising the accounts used by employees. Cloud-based user account attacks have increased 300% between 2016 and 2017. Thus, the capability to have visibility into behaviours that may indicate such abnormal activities is paramount.

By virtually eliminating the need for custom policy creation, Advanced Threat Analytics provides you with the clarity of information and suggested remediation options, included within the solutions alerts. The ability to transfer the initial triage of events to lower cost support personnel can now be realized. This allows for the specialized skillset of the SOC teams to focus on higher value initiatives by reducing their need to address “routine” investigations.

What is Microsoft Advanced Threat Analytics?

Advanced Threat Analytics (ATA) is one of many components within the Enterprise Mobility + Security solution offered by Microsoft.

Advanced Threat Analytics also has the ability to read Active Directory and is able to contextualize an event prior to sending an alert. For example, if someone logs into a server that they have not logged into before, the event would be new and would raise a flag. Advanced Threat Analytics would then look at the group memberships of that individual to see if the action being performed is truly a risk. If the account aligns with the Active Directory permissions granted for the login and if the behaviour aligns with normal patterns for this user’s actions, then no alert would be raised within that context.

Now, if the same account had made multiple attempts to several servers that they did not have Active Directory permissions to access prior to the successful login, an alert would be raised for the failures but would also include the successful login as part of the chain of events. This second aspect also includes the ability for the Advanced Threat Analytics Centre to be updated via signatures that allow for the alerting of any readily identifiable security concerns such as “pass the hash” attacks. 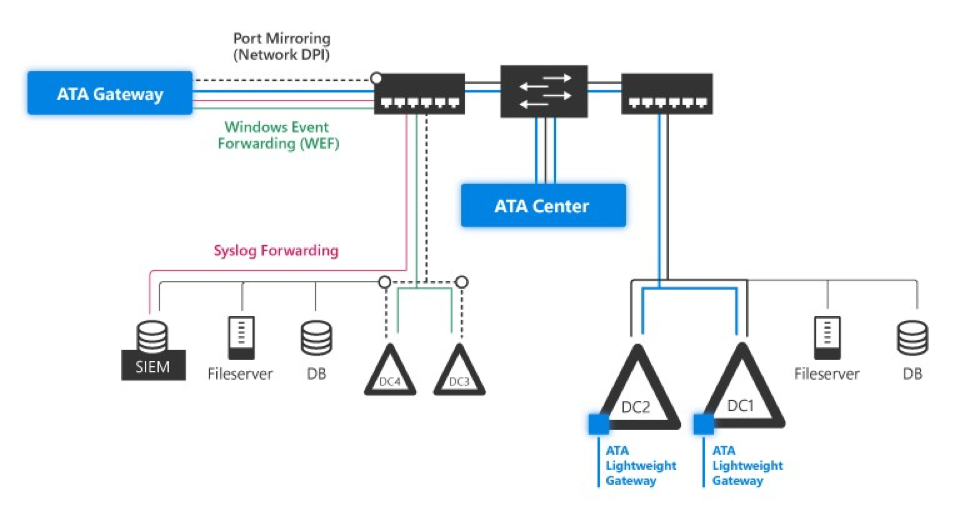 ATA Centre is the server that acts as the brains behind the monitoring solution. The ATA Centre houses the solutions configuration and provides the alerting services.

ATA Lightweight Gateway is an agent-based alternative to the ATA Gateway. The lightweight gateway would be deployed on every Domain Controller in which there is no gateway located on the same switching span port as the Domain Controller. This solution would be suitable for remote locations such as branch offices.

As described earlier, Advanced Threat Analytics builds its alerts and actions on patterns based on historical data through a combination of information stored within its database, reading Active Directory for the entities’ permissions, as well as known attack signatures such as “pass the hash” attacks. Based on this information, Advanced Threat Analytics then makes a calculated decision as to the likelihood of the event being a legitimate breach of security or a permitted operation.

Advanced Threat Analytics alerts are designed to be clear and decisive. The report is divided into the following three sections:

Next Steps - How to Get Started with Advanced Threat Analytics

Until September 29, 2017, ProServeIT is offering a no cost gateway requirements analysis to help your organization plan for the deployment of Advanced Threat Analytics. This includes: